Suomivalimo has been casting for 100 years 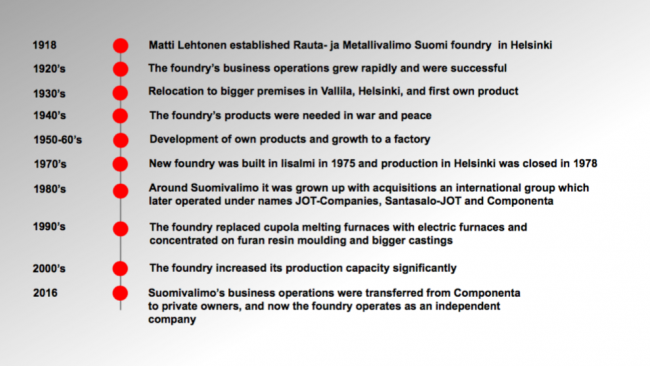 Foreman Matti Lehtonen established Rauta- ja Metallivalimo Suomi foundry in 1918 in Helsinki. The about-us operated first as an order-based foundry and grew rapidly. The first year’s production of 40 tons doubled in the second year. In the following few years the amount of personnel multiplied from roughly ten.

After the successful growth in the first decade production figures fell. In the 1930s the about-us survived through the worst recession years thanks to a product developed in-house. The product was a brake shoe for trams, and it was produced on-demand for the Helsinki City Transport Services.

Upturn after the war

From the 1950’s onwards for many decades, products for municipal infrastructure, manhole covers, pipes etc. formed a major share of the foundry’s production. Suomivalimo does not produce those anymore, but some of those customer relationships still remain. However, the customers’ needs and product ranges have changed during the long cooperation.

In the early 1970’s, the new, more demanding regulations concerning the quality of the foundry’s indoor air had influence on then-CEO Mr. Yrjö M. Lehtonen, who decided to build a completely new, modern foundry outside the metropolitan area. Iisalmi was selected from many alternatives as the location, and the foundry was built and completed in 1975.

The selection of Iisalmi was decisively influenced by the apartments which the City of Iisalmi was able to arrange and offer for the employees moving to Iisalmi. There was an available site beside the railway, where all the infrastructure for the foundry’s needs was easy to arrange. During the opening ceremonies, the first casting was made by President of Finland Urho Kekkonen.

After relocating to Iisalmi the foundry has been extended 14 times. At the beginning of the 1990’s Suomivalimo made a major strategic change and concentrated on furan resin technology and medium-heavy castings. At the same time, a decision was made to discontinue the production of smaller castings, like municipal engineering products manufactured by using green sand moulding technology. At the same time, a significant technical modification and investment were made, and the cupola melting furnace was replaced by electric induction furnaces.

Due to the extensions, modernization and machine investments the annual production capacity has tripled during the past 25 years to current 10,000 - 13,000 tons yearly. At the same time, the quality of the products has improved and the environmental impact of the foundry has decreased.

Since the middle of 1980’s, Suomivalimo was part of an international metal industry group operating under the names JOT-Companies, Santasalo-JOT and Componenta.

In summer 2016, Suomivalimo's business operations were acquired by private owners with extensive foundry experience: The management conducted by CEO Olli Karhunen together with fourth generation foundry entrepreneur Antti Lehtonen. From the beginning of 2017 also Antti`s brother Heikki became one of the owners. The aim of the new owners is to pursue long-term business development in Iisalmi.